“…if you used to be truly happy, and now you’re not, then you should go back to the way it was when you were happy.”

My dad used to call me “grunky.” I was always a moody kid and he had a penchant for making up words and phrases on the spot. I can only assume “grunky” is some weird hybrid of a grumpy person and someone in a funk. In any case, it was his way of affectionately teasing me and trying to get me to laugh when I was in a bad mood.

I didn’t realize it until well into adolescence but there is a medical explanation for my grunkiness: I’m a depressive. This means different things for different people. For me, it means I’m often irritable, stressed, frustrated, tired and weepy–sometimes all at once. Without medication, debilitatingly so. For the most part, my depression is manageable and doesn’t really affect my everyday life one way or another. But there have been times when it’s been completely disruptive. I was sad all the time, for no reason. I was crying multiple times a day at inopportune moments like, say, at work. It was hard for me to get out of bed and even harder to fall asleep. Doing laundry felt like it took every ounce of strength of my body. I had no appetite. I was scared of the way I felt all the time. Luckily, the worst parts of this illness have been alleviated with anti-depressants and I’m able to be a normal (albeit pessimistic) person.

But I don’t fool myself. I’ll probably struggle with depression to some degree all my life. I just have to hope that means I’ll be periodically grunky and not emotionally wrecked for months at a time. I know that depression is extremely common and mental health issues run in my family. But I feel incredibly weak when I’m down. That’s why it is heartening to see mental illness–depression in particular–get the attention it deserves in the media. In the last five years or so, TV shows have featured more and more characters dealing with mental illness:

Of course, some do a better job of it than others. Carrie Mathison’s bipolar disorder leans more towards manic than depressive. Conversely, Gretchen’s dance party on YTW–her attempt to physically shake off the impending sadness–is spot-on. Crazy Ex-Girlfriend, a musical with a tongue-in-cheek title, takes place in a heightened version of our reality. But I think Rebecca Bunch’s character arc is one of the best depictions of depression and the desperate, desperate need to feel better I’ve ever seen.

Crazy Ex-Girlfriend begins about ten years ago as a teenage Rebecca is dumped by Josh Chan at the end of musical-theatre camp. She is crushed and the audience is led to believe this is where a lot of things went wrong in her life. Her romantic illusions are shattered. Instead of pursuing music as a passion, Bex caves to her mother’s will and focuses on the law as a career path. To describe this in Simone de Beauvoir‘s terms, this is Rebecca’s turning point. Teenage Rebecca “buries her childhood” of drama, music, grand gestures, and singing her feelings and “enters adult existence submissively.” When Rebecca and Josh meet again in 2015, she realizes her time with him (and, importantly, her time putting on musicals 24/7) was the last time she was genuinely happy. You know, per the butter ad. 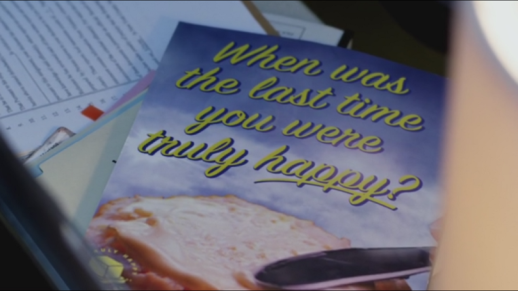 Right before she runs into Josh again, Rebecca is trying to stave off a panic attack. She has just been offered a partner position at her law firm but feels more burdened than excited. When laid-back, content Josh mentions that he is moving back to his hometown in suburban California, Rebecca impulsively decides to follow him there. On the surface, Rebecca is chasing a dude she dated in high school because she’s convinced herself he is the long-lost love of her life. And that’s definitely a part of it, don’t get me wrong. But she’s also chasing the happiness that has eluded her since theatre camp. And, eventually, she tells Josh that part of the story: “The truth is I was miserable in New York. I was so depressed. And all I did was-was work. I had no life. The world was just, like, gray. And then I ran into you, Josh. And-and you told me about West Covina, and-and you kept using the word ‘happy.’ And I hadn’t, like, thought about that word in so long and-and it just, like, reverberated within me. And so that day, I-I made the decision that I had to be where the happiness was.“

Predictably, things do not go quite so smoothly for Bex. Despite the weather patterns, California is not a panacea. Her problems do not magically disappear and she still has a lot to learn: Josh is in a relationship; it’s hard making friends as an adult; putting all your meds down the garbage disposal will have ramifications; and–as My Best Friend’s Wedding taught us all–conniving to break up your “true love” and his partner is not cute. It’s bananas.

Since this is a musical, a lot of Rebecca’s self-discovery manifests itself in song. There are several instances when she and the show directly acknowledge her questionable behavior and mental health struggles. Here’s a sampling of these fourth-wall cracking numbers:

As these song titles suggest, there is no simple solution to Rebecca Bunch’s problems. Crazy Ex-Girlfriend is brave and groundbreaking because it’s an honest depiction of mental illness and its ramifications. Let’s say that most characters’ overall development looks like this: 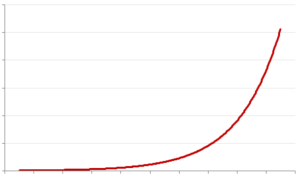 A character with mental health struggles’ development would look something like this:

Rebecca’s growth happens in fits and starts; she routinely makes progress and promptly backslides. She will probably be “crazy” to some extent for her entire life, and that’s okay. She’s still a successful lawyer, a supportive friend and a hilarious protagonist. Not to mention the fact that she is constantly trying. Trying to be happier, healthier, better. Rebecca might be the villain in her own story, but she’s a fully-formed person who just happens to have a chemical imbalance. That makes her a hero in mine.