“Adolescence is when girls experience social pressure to put aside their authentic selves and to display only a small portion of their gifts.”

But what do the girls do with that pressure? Do they succumb to it? Ignore it completely? I only have my limited research and experience to go on, but I think most girls inhabit both sides.

If I was to boil down my high school experience in one sentence, it would be this: You are supposed to be your complete, individual self without straying too far from the crowd. And this brings me to today’s two featured Outside Girls: Angela Chase of My So-Called Life and Lindsay Weir of Freaks and Geeks. Both of these girls choose to leave behind best friends and join the alternative crowd. Both are protagonists of dearly-departed shows that lasted only one season. Both presented us with two of the best theme songs in TV history. And both are repeatedly described as real. 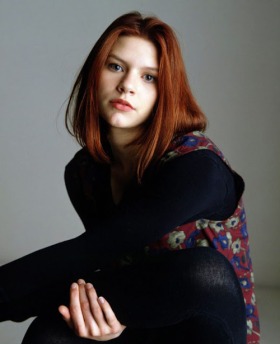 In MSCL‘s first episode, Angela Chase decides to dye her hair “Crimson Glow.” As her wistful voiceover tells the audience, “When Rayanne Graff told me my hair was holding me back, I had to listen. ‘Cause she wasn’t just talking about my hair, she was talking about my life.” This is the beginning of Angela straddling the line between her old family and friends and the excitement she finds with Rayanne, Rickie and her epic-leaner of a crush, Jordan Catalano. Angela’s authenticity is marked by her ill-fitting clothes, her blemishes and her allergy to geometry. But Michele Byers astutely notes that Angela’s realism is also marked by her “vacillations between her old life and her potential new ones…between the mainstream that is her birthright and the marginal worlds she is intrigued enough to visit.” Angela makes a choice to leave Sharon and her family behind, so she is an Outside Girl. But that doesn’t mean that she is entirely comfortable in either mode. A part of her will always want to cry into her mother’s arms when she is sad. And a part of her will always be unable to look at her mother “without wanting to stab her–repeatedly.”

I think creator Paul Feig sums up Freaks and Geeks in the best possible way: “It’s about people who don’t tend to get the respect of the ‘normal’ world, who are individuals no matter how hard they try to fit in.” Like Angela, Lindsay makes a choice to break from the world of mathletes, teachers’ pets, and a thoroughly un-modern Millie. She joins the Freaks, who Terry Teachout characterizes as “slightly older underachievers who have banded together to smoke dope and sneer at the popular kids.” Teachout also points out that the popular kids aren’t exactly drawn to the Freaks, so “the rejection is mutual.”  Lindsay (like all the characters of F&G‘s world) is recognizable and real. Personally, I relate to Lindsay more than any other Outside Girl (and I feel connected to them all). This scene from the first episode is me in high school:

Like Lindsay, I would try to do what was right and almost always regretted it.*

And that is the magic of F&G. Lindsay’s break from her old life is provoked by her grandmother’s death. But as Jonathan Gray points out, Lindsay “is struggling not so much to fit in but to ‘fit out'” even though she “is not so keen to give up on her old friends; nor is she comfortable deriding them as a bunch of losers and stiffs.” Lindsay wavers between Freak and mathlete, without feeling at ease with either label. She is not a stereotype or a regular teen girl character; she is real.

I would argue that most adolescent girls go through a period when they simultaneously want to be themselves and want to be what others would like them to be. Angela Chase and (especially) Lindsay Weir are characters who travel to the outside but can’t help but look back.

*Personal Story Time: In tenth grade, my social studies yelled at a fellow student for a completely bogus reason. I approached Mr. Teacher after class and told him the student wasn’t to blame and that he had acted horribly. Mr. Teacher said I was right (!) and he was sorry. The next day in class he told me and the student (in front of all the attendees of World History) that I had stood up for the student-victim. And then the student looked humiliated and refused to acknowledge me for the rest of the week. Moral of the story: I feel your pain, Linds.