“Let’s do some living after we die”

— “Wild Horses” by The Rolling Stones

Death changes everything. (Yes, thank you Captain Obvious.) But it’s true. When someone close to you disappears, your entire worldview transforms. Ideas that you once took for granted might seem outlandish and ridiculous after a loss. And I speak from personal experience when I say that. In fact, I would argue that there are two versions of us: the people we were pre-bereavement and the people we are now. So what kind of person are you when death is a regular part of your life? Or when death is the way you finance your life? Well, if you are Claire Fisher of Six Feet Under, you accept that darkness without letting it define you. And that’s a difficult look to pull off. 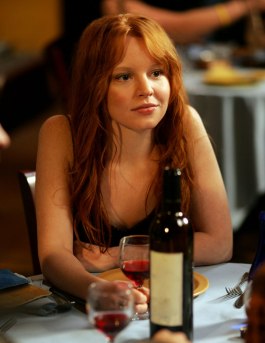 Claire’s father–of the titular Fisher and Sons funeral home–dies in the first fifteen minutes of SFU‘s pilot. Like all people who lose a loved one, this affects Claire. But that is not the catalyst for her Outside Girl status.  As someone who spent her childhood in the vicinity of emotionally-shattered people, Claire attends her own father’s funeral in a state of calm detachment. After all, she sees this stuff every day. Funerals are just another part of Claire’s regular routine, and this prevents her from grieving her father’s death publicly. As this scene would suggest, death itself is the barrier between the youngest Fisher and the rest of the world. Her peers think she is freaky because of her father’s profession and the house she grew up in. Instead of being wounded or feeling excluded, Claire decides to be amused and enjoys being outcast. Why else would she paint her car (a second-hand hearse) lime green?

Avi Shoshana and Elly Teman argue that Claire’s refusal to let constant death ruin her life is proof of the character’s embodiment of the “life-self.” This is a self that “is unchained, liberated, and sexual. It does not conform to societal dictates but follows an original path based on curiosity, adventurousness…and openness.” Claire actively enjoys being shunned by her fellow students, and this independent streak even motivates her to carve out her own identity within the family. In other words, she likes that death keeps her away from other people, but she refuses to let it numb her from happiness or passion. Unlike her mother and brother David, Claire uses the constant death around her as a reminder to live her life by her own rules. She is not bogged down by melancholia, but is itching with the need to experience everything during her short time on earth. This primal drive leads to experimentation with drugs and sex, multiple artistic endeavors, deviation from the expected path, surreal musical performances, and attempts to find connection with other misfits and outcasts.

This isn’t to say that Claire is cold or apathetic towards the loss of her father and, eventually, her elder brother Nate. We do see her mourn in several different instances. But her liveliness, her “life-self” stops her from grieving in the socially predictable way. Instead of crying quietly next to her father’s grave, Claire sobs uncontrollably two years later at her mother’s second wedding. Instead of dressing up nicely to attend her brother’s wake, she shows up late in a T-shirt. Instead of acting like everything is alright after Nate is gone, Claire feels her sadness 100 percent. She shows up to work drunk, she flips her coworkers the bird, and screams at her family and boyfriend. Think of it this way: Claire knows that death is a part of life. But damned if she isn’t going to live her life the way she sees fit before she dies.

And unlike many of her fellow Outside Girls, when Claire breaks away from the crowd, she does not go back. From the first season on, she has a natural suspicion of what other people see as normal and even desirable. When she visits a school counselor, she asks: “Is that the only option? Go to college, get a job so you can be a good consumer until you drop dead of exhaustion? I don’t want that…I just want something to matter.” Claire’s personification of the life-self means that she does not care about conformity and living the life that her parents’ imagined for her. Instead, she cares about making a mark by exploring topics she cares about. Claire flits around from art project to art project; medium to medium; boyfriend to boyfriend; passion to passion; even city to city. In many circumstances, I would categorize someone like her as flaky, immature, and indecisive. But that’s not the whole story. It’s better that Claire tries to conquer as much as she can in her life than being like her father. After all, he only really lives after he is dead.

2 thoughts on “Death becomes her”